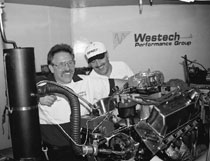 The Engine Masters Challenge was conceived here at Popular Hot Rodding to deliver readers a contest unlike any before. We developed a series of rules and hard parameters to limit entries to what we felt were street-sane levels, and left our many participants with approximately 10 months to research, design, build, and tune to their heart’s content.

As is common in all arenas of Motorsport, we built a monetary prize on the strength of contingency participation. This means those who manufactured the parts chosen to power the winning entries will pay the majority of the prize money. We also threw the builders a few curve balls, in that we weren’t testing for peak power, but average power numbers in the range we were testing (2,500-6,500 rpm). By limiting the rpm range and rewarding the average power being produced (scores were determined by adding both the average torque and horsepower figures in the test rpm range), the results are most beneficial to our street-based readership.

We also supplied the 92-octane fuel used in all of our Qualifying and Finals test sessions, and all the pulls were made on fuel from the same batch as supplied by 76 Racing Fuels. We’d found a way to force both amateur and professional racing engine builders into developing street-flavored powerplants, and this effort will surely pay off for the most important people in the magazine business: the readers! 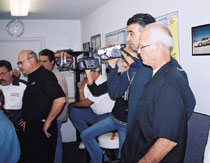 Known as a head-porting expert to some of the engineers around COMP, Dave Storlein made big claims as he came through the door and he backed them up! This Ford was our best engine overall and it wasn’t due to just one issue. Dave made over 100 pulls with Bob Kison at Applied Dyno in Eagan , Minnesota , to prepare for the competition. He chose a big bore and short stroke combo built around anAustralian cylinder head from CHI (fitted for Comp’s big-block Chevy 1.7:1 rockers) and a modified Ford Racing “Yates” manifold, a Wilson manifold spacer, and a Demon 820 with annular boosters. We’re told that though the heads started with 210cc intake runners, he sized them down to around 180cc to get the air speed up. In the EM Challenge, smaller seems to work better.

Dave’s engine featured a reverse-cooling setup with an external electric water pump, a creative move that was well within the rules. He was another that didn’t expect the use of SuperFlow’s airhorn, so between that and humidity, his jetting was fat in some spots. From the photos you can note that we took special care avoid heat, including Thermo-tec wrapped headers and special heat shields–we must admit that the ambient temperatures in the cell were lowest on his pulls, too. “If that dyno in California looks to give us that much more power like we think, you tell Joe Sherman to get his ass out of the way.” We’ll see about that, Dave. This guy made certain that he had every component in his engine was selected with a contingency payoff on the other end. 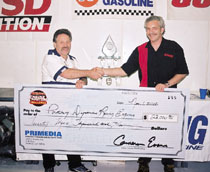